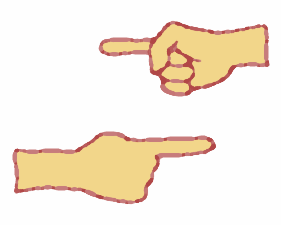 Blame is the assigning of causal responsibility for a negative event or outcome in a negative way. It is not always easy to describe exactly what sorts of behavior or speech constitutes blame, although some cases are obvious, such as when someone says that something is a person's "fault". When taken to an extreme, blame can become scapegoating.

In Why This Way, our rules of communication expressly prohibit blaming people for negative outcomes. This is true even when everyone present agrees that a person's actions caused a particular negative outcome. In accordance with our belief in placing more emphasis on the principles and spirit of our rules, in order to follow our rules, it is important that people understand and avoid constructs of language that come across as blaming.

We distinguish blame from the taking of responsibility; although we wish to avoid blaming people, we also wish to encourage people to take responsibility for their actions of their own initiative.

It is hard to exactly define or pin down what is and isn't blame, but blame often exhibits these characteristics:

Blame tends to come across as attacking a person, and is often met with defensiveness. In some cases, fear of punishment can create a strong incentive for a person defending their actions, if they feel that they must convince others that they are not responsible for something, lest they face punishment.

When a person responds defensively to an accusation, they become less open to taking responsibility of their own initiative. A person defending themselves in this manner will often come up with justifications or rationalizations for their actions, and not not take responsibility for their choices, and they may be more likely to lie or distort the truth.

Self-blame creates many of the same problems associated with blaming others, and can cause internal conflict and hinder a person's ability to act in healthy ways. When a person blames themselves for a negative outcome, they may see themselves as solely responsible for what happened, rather than acknowledging what other factors, like external circumstances or other people's actions or responses.

Self-blame can result in painful emotions like guilt and shame that make it difficult to function. In some cases, the suffering caused by self-blame can make it more likely for a person to continue making harmful choices.

We consider it healthier for each person to acknowledge the role their actions and choices played in a situation, while also acknowledging the role that other factors played. For example, we believe that, when in a healthy state, a person takes responsibility for their actions, but does not directly take responsibility for other people's feelings, because other people's feelings are influenced by their thoughts and beliefs. Another aspect of avoiding self-blame is for a person to analyze their past choices without judging or criticizing themselves as a person. For example a person could think "that was a bad choice" without thinking "I was a bad person" or "I have a character flaw" for making that choice.