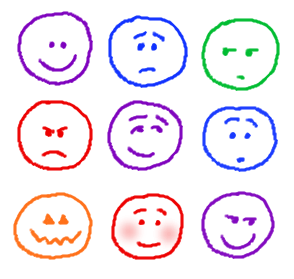 Feelings or emotions are an important topic in Why This Way. Our views on emotion are complex; we tend to give feelings importance, but also be cautious about the ways in which we talk about them.

Some of the relevant points from our core beliefs and practices, related to emotion, include:

Emotion and the rules of communication

Our rules of communication prohibit making a statement about another person's thoughts, intentions, and motivations, and we usually interpret this to also prohibit making a statement about a person's feelings ("she felt uncomfortable"), but to allow making statements about our impressions or reading of a person's feelings ("she seemed uncomfortable to me"). This distinction is important because people can (and frequently do) misread other people's emotions, yet some degree of reading emotions is essential for many types of human interaction.

However, feeling and emotion are only two of many factors influencing the rules of communication. Our rules also reflect the influence of logic and science, as many of the rules also relate to common fallacies or errors in logic, and the rules are also shaped by observations from cognitive behavioral therapy about cognitive distortions characteristic of mental disorder. Another way of looking at the rules is that many of them are intended to address patterns of communicating that are pointed to as problematic by the intersection of emotion, logic, and the science of psychology.