From Why This Way
(Redirected from Respectful)
Jump to: navigation, search 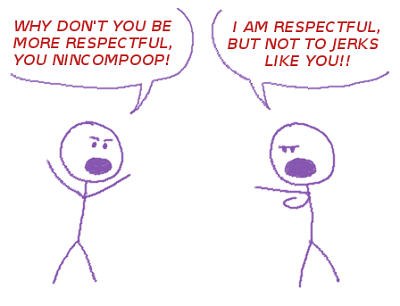 We believe in treating people with respect regardless of how they treat us, in part to prevent conflicts like the one pictured here.

In Why This Way, we believe in treating all people with respect, reflected both in our core beliefs and practices. People do not always agree on exactly what respect means or looks like. Ideas and beliefs about respect can vary culturally, as well as from one individual to another.

Our views of treating people with respect

Here are some ideas that we have established about how to respect other people:

Respect and other people's feelings

Views of respect that conflict with our values

There are many different views and perspectives on respect, and there are some that conflict with the values of Why This Way in various ways. Some of these conflicting views include:

These differing views of respect often play out in the context of the treatment of children, although they can occur in other contexts as well.

Respect and obedience become associated when people assert that someone is being inherently disrespectful if they disobey a rule or authority figure. In Why This Way, we would often disagree with these sorts of assertions, pointing out that there are some circumstances in which a person can disobey rules or the instructions of an authority figure, while being fully respectful of the authority figure or, even in some cases, the spirit of the rules. Examples include:

Respecting some people but not others

There are many circumstances in which society or culture places more importance on respecting some people than others. In some circumstances, there can be financial motivations or power structures that lead to people being treated with differing amounts of respect. Some examples include:

Other kinds of respect

In Why This Way, when we talk about respecting people, we mostly mean the aforementioned ideas about treating people with respect, but there are other ways that people define respect, which can refer to some people but not others. For instance, if you trust someone, you are more likely to respect that person's judgment or advice more than someone else's.