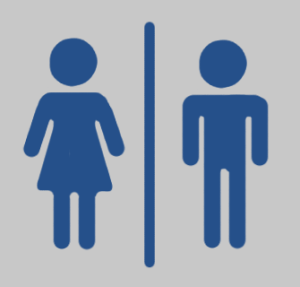 This page communicates our views on Bathrooms; our focus of discussion up to this point has been on how bathrooms in public buildings break down along gender identity.

The norm in most of the U.S. is for larger public buildings to have two separate shared bathrooms, one for men and one for women. This setup can be problematic for people who do not fit into a gender binary, including transgendered people who are in the process of transitioning, people who are ambiguous with respect to gender, or even men or women who outwardly exhibit more of the traits of the sex opposite from their biological sex. We have discussed two ways of addressing this problem in the sections below.

Another problem that we have discussed is long waits for restrooms for one gender when a restroom of the opposite gender is available, resulting in people having to wait to use the restroom even though toilets are available in the other restroom. This is more commonly a problem for women, and is most common in spaces where a majority of the people using the restroom are women.

Other options for bathrooms besides men/women

Accommodating people who don't fit into the gender binary

We have agreed on the following practice:

The reason for this practice is because single-sex bathrooms are the norm in most places, and not everyone fits clearly into the gender binary. If people are criticized for not matching the gender of the bathroom they are using, people who don't fit into the gender binary can potentially attract such criticism no matter what choice they make.