From Why This Way
Jump to navigationJump to search 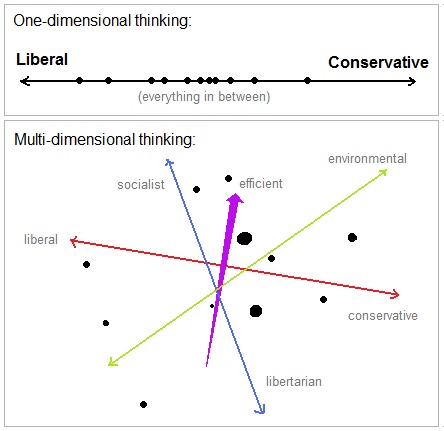 One-Dimensional Thinking is a way of thinking that involves viewing something in terms of a single linear factor or scale. One-dimensional thinking can involve numbers, like a student's GPA, or a qualitative spectrum, like Liberal/Conservative in politics. One-dimensional thinking can become problematic or harmful when it is applied to things that are more complex and have multiple factors, or things that cannot be captured accurately on a simple scale.

Examples of inappropriate uses of one-dimensional thinking include:

When is one-dimensional thinking appropriate?

In science and sometimes in business, one-dimensional thinking can be useful when it accurately describes reality. For example:

It is important to be cautious though even with quantities that appear to be linear.

For example, a typical room, certain parts of the room may be warmer or colder than others. A cold-sensitive houseplant might die if placed near a drafty window, even if the average temperature in the room is warm enough for it. Similarly, a business might look at several decisions and choose ones that maximized their apparent financial gain, but hidden costs might cause this choice to be a poor decision in the long-term.

Focusing on the linear variable rather than the original goal

Many of the problems with one-dimensional thinking arise when people create a single, linear variable to measure something desirable and good, and then try to maximize that variable under the erroneous idea that they will then be improving whatever it was the variable was designed to measure.

Not viewing someone as a whole person

In our rules of communication, we have the positive principle, "talk about each person as a whole person." When someone measures a person's entire worth by a single factor, such as their income or their grades, then they are not seeing them as a whole person, but as only one quality. Seeing people this way can negatively effect a person's self-esteem, because the person may see their own value as being dependent on one factor, which is unstable. It can also encourage people to constantly compare themselves to other people and feel insecure about how they measure up. When a person believes that people can be valuable in many different ways, it's harder to compare one's value directly to someone else's.

When people are thinking one-dimensionally, they may be less likely to find creative solutions to problems. For example, in a conflict resolution, people may see the best solution as a compromise which is halfway between what both parties want, when there may be better solutions that involve more creative thinking.